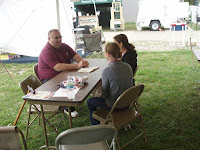 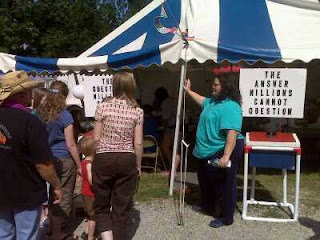 Dominican Update:   These are only highlights and snippets of the events.  When the team returns we will be asking them  to share more of the actual stories with you. 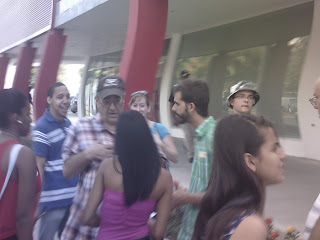 Day 5 & 6 (Tuesday & Wednesday)  ministering and showing the box at the Christian schools.  The majority of the students are not Christians, however.   There were over 140 students who accepted the Lord in two days.

Day 7:  (Thursday) A little time for sightseeing and then on to another church in San Cristobal. (Long bumpy ride)

Day 8:  (Friday) A slower day trying to get translators, sitting on bus waiting for a long time.  15 salvations.  The churches visited are in some of the poorest, crime ridden areas.  (While they were speaking there was a rat that ran across one of the wires.)

According to one of the pastors this area is hungry for the Lord, their hearts are ready.  He said it is like the time of Pentecost.  These are a religious people - but they don't have the whole story....they are ripe and ready for the saving truth of God's word.

Today-Day 9 (Saturday)  the mission team did a video presentation and a question and answer period following. While the presentation was going on a mom whose child was saved the day before at the school came in.  One of the local men went up to her and asked her to look in the box and they were able to lead her to the Lord.

Apx. 30 people went down with the mission team to the ocean side.  The mission team members were partnered with a translator and a local.  At one time there were 15 people waiting to look in the box.  The team was running up and down the area, answering questions  and then sending the translator out with a local to be a new team.  In only 2 hours, 158 salvations took place.   PRAISE God for his presence and faithfulness.

Tomorrow is Sunday.  We will be speaking  3 times at churches again.
Posted by Laura Anne at 9:50 PM